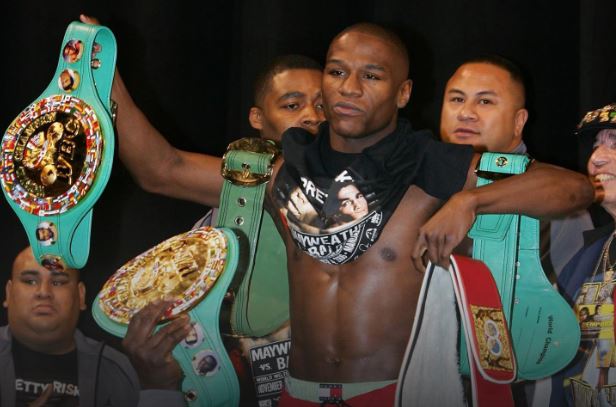 “I told myself I wouldn’t cry” – Floyd Mayweather gets emotional while being inducted into the International Boxing Hall Of Fame.

On Sunday afternoon (June 12, 2022), Mayweather was amongst a three-class group of stars inducted into the International Boxing Hall of Fame. Before he began his acceptance speech, Mayweather could not hold back the tears.

“I don’t really know what to say,” he said. “I told myself I wouldn’t cry, but this is something beautiful. This is one of the best days of my life.”

Mayweather currently has a perfect record of 50-0 with 27 knockouts. His bank account isn’t looking too bad either. It has been reported that Mayweather’s earnings are more than $800 million, making him the wealthiest boxer ever.

The lightweight champ credited his father/trainer Floyd Mayweather Sr. as being responsible for his success. He also acknowledged his father for introducing him to the sport.

“I love my dad because, without him, this wouldn’t be possible,” Mayweather said. “He’s the best trainer ever. There will never be another trainer that’s better than my dad.”

While mentioning his dad, Mayweather says he was grateful for the wise advice his father gave him early in his career: Don’t take unnecessary punishment.

“I said, ‘You know what? I’m going to take less punishment,’” the younger Mayweather said. “I want to retire on my own terms. I want to make smart investments, so I’m able to live a comfortable life once my career is over.”

Roy Jones Jr., Bernard Hopkins, Shane Mosley, Andre Ward, and others were also a part of the induction ceremony.