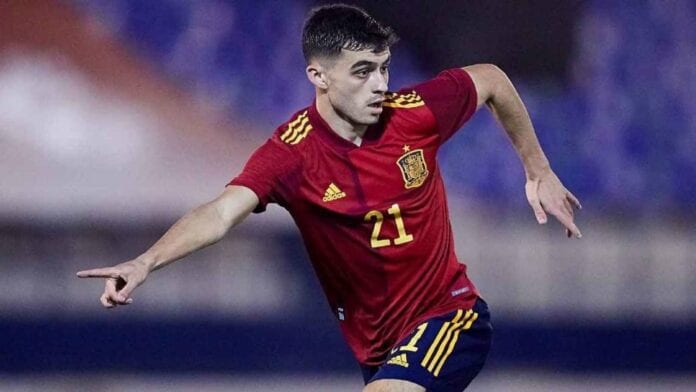 After a fabulous season, the 19-year Spaniard has finally won the Golden Boy Award 2021, Pedri has been delightful for both his club and country, these are some of the reasons the Spanish international deserves the award…

1. Pedri Gonzàlez Lopez is one of the best young talents aside from Haaland and Mbappe.

The Fc Barcelona talent has been one of the best in his position, but mostly Erling Haaland and Kylian Mbappe overshadow this talent with their performance in the headlines. Pedri could be the next star on the lists of young players although there are many coming up, he has already shown his qualities and is justified to be among the best young talent.

The 19- year joined Fc Barcelona from Las Palmas on 1 September 2020 under the watch of former manager Ronald Koeman and made his club debut against Villarreal where Fc Barcelona won 4-0 at the Camp Nou, he came on as a sub to replace Philippe Coutinho in the particular game.

3. He won his first trophy with Fc Barcelona on 17 April.

On April 17, Pedri won his first trophy for Fc Barcelona in the Copa Del Rey finals against Athletic Bilbao, Fc Barcelona won 4-0 in the final although Pedri didn’t play the whole game, he was substituted in the 81 minutes but was key in that game.

4. Pedri Gonzàlez Lopez had a fantastic game against Juventus in the Champions League 2020-21 season.

One of his best games is in the Champions League against Juventus where he put up a sublime performance against the Old Ladies in Turin, Fc Barcelona was triumphant in that game which they won away from home by 0-2 but Pedri display caught the eyes of many around the world.

5. He scored his first goal for Barcelona on his UEFA Champions League.

The Olympic silver medalist’s first goal came in an emphatic win against Ferencvaros at the Camp Nou, Pedri didn’t start that game he replaced Ansu Fati in that game and he registered his name on the score sheet by scoring in 82 minutes. The game ended 5-1 in the favour of Barcelona.

6. He was a key player in the Euros 2020 for Spain which got him to the semi-finals.

Pedri’s form continued at the international level and was one of the best youngsters in Euro 2020, Pedri is a player that is not physically there yet but the youngster always shows his qualities and awareness when he’s allowed to play. In Euro 2020 Pedri aghast the football world with his performance and as young as he is, nobody thought he could put up such display.

7. Pedri Gonzàlez was named Euro 2020 young player of the tournament.

9. He was named in Spain Olympics squad after the Euro 2020.

After a splendid tournament in the Euro, Pedri got the chance to participate in the Olympics games that took place in Tokyo 2020. Pedri had no rest in the summer after the Euro tournament came to an end, he had to head straight to the Olympics.

10. Pedri Gonzàlez played his 66th game for the season against Egypt.

Pedri became the youngest to play 66 games in 2020 without having a rest and the game against Egypt at the Olympics made that tally possible.

11. The game against Brazil in the Olympics finals was his 73rd where Spain lost 2-1.

From 66 games to 73 games in the final against Brazil but unfortunately, Spain was defeated 2-1 in extra time but won a silver medal in the competition.

After the disappointment in the Euro 2020 and Olympics final against Brazil, the Spain team managed to win silver medal although they tried to win gold, Brazil carried the day with a victory.

13. His best game in the Euro 2020 was against Italy in the semi-finals where they lost on penalties.

Italy was one of the difficult opponents in the tournament and were favorites as well because of their massive improvement under Roberto Manchini, Pedri also didn’t hesitate to show his qualities against a top and improved side like Italy on the day. Leonardo Bonucci thumped the Spaniard up for his display

Consistency is always key in a game and that’s what we want to see Pedri produce in the coming years. His success doesn’t have to end here but would rather love to see him stride as a footballer and write his own history as a player.