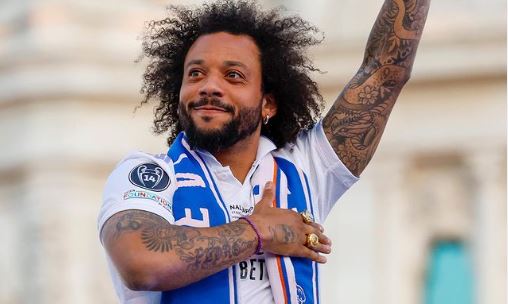 Marcelo’s Tattoos: Marcelo Vieira Jr has about 23 tattoos on his body. He has dropped a video of an updated Champions League tattoo on his Instagram page following Real Madrid’s triumph.

Marcelo Vieira da Silva Júnior, best known as Marcelo and “El Loco” is a Brazilian Professional Footballer who plays for the Spanish club Real Madrid and the Brazil National Teams. He had started playing football in order to support his family.

Internationally recognized for his quality and agility with the ball he plays mainly as a left-back, but can also operate as a left-winger.

Marcelo has some of the most attractive and coolest tattoos though Marcelo doesn’t like people asking him about his tattoos because he thinks it is quite personal. Marcelo gets tattoos to remember the important events of his life. According to The Body Art Guru, Marcelo has 23 tattoos on his body. Surprisingly, all his tattoos have meanings.

Sharing the video of his new updated tattoo on his over 56 million followers’ Instagram page, the founder of Academy 12 captioned his post with “The tattoo clearly needed some update ✋🏾”.

Below are a few of Marcelo’s tattoos and their meanings.

Aside from his Champions League tattoo on his tigh, he has his ‘Grandfather’s name tattoo on his right arm. His arm is tattooed with the name of his grandfather, “PEDRO” who was his motivation when the beginning of his career was very difficult. His grandfather believed in him and supported him the most. He claims that he owes his success to his top grandad. His grandpa paid for his football endeavors and thus Marcelo got his name inked on him.

Also, on the ring finger Knuckle of Marcello’s right hand has a tattoo of “I” inked on it.

The outside of the footballer’s right hand has a tattoo of a blessed skull inked on it.

The forearm of the footballer’s right arm consists of the face of a tribal human.

On Marcello’s right forearm there exists a tattoo of two masks expressing happiness and sadness inked contradicting each other commonly referred to as yin yan masks.

Marcello has a tattoo of two hands inked on the right bicep of his arm. The two hands represent Marcello and  his son hands in hand, which states the forever bond between them