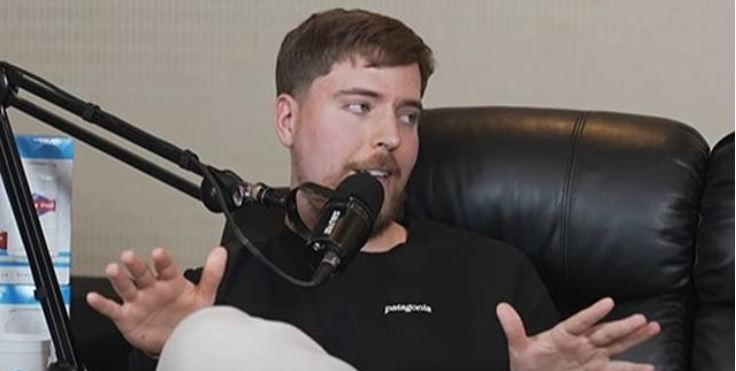 YouTube star MrBeast explained why his burger chain, MrBeast Burger, doesn’t tout many ‘healthy’ options after he was asked about the influence of his restaurant on his young fans.

Jimmy ‘MrBeast’ Donaldson is more than a top-tier YouTuber. The 24-year-old internet star also started his very own restaurant, MrBeast Burger, on top of his ‘Feastables’ chocolate bar line and a local philanthropy project.

MrBeast Burger has been a smashing success for Donaldson. The fast food chain, which he opened in 2020, has since accrued over $100 million in revenue on top of breaking records by selling the most burgers in a single day after opening a physical location in New Jersey.

However, MrBeast Burger isn’t known for being a health-conscious choice; the menu boasts items like cheeseburgers with two smashed beef patties, cheesy quesadillas, and seasoned fries.

Donaldson was asked about this particular facet of his company during a podcast with the NELK Boys and bodybuilder-influencer Bradley Martyn, who wanted to know how the YouTuber felt about selling burgers and chocolate when he has an impressionable audience.

According to MrBeast, he’d actually tried selling a lettuce wrap at some point in the past, but the sales were simply too low to justify creating healthier options for buyers.

“It was literally less than one percent of our sales,” he explained. “No one gave a f**k. …that is the problem. If you go too healthy, then just not a person on the planet f**king buys it.”

“So, with Feastables — take Hershey’s, for example. There’s ten ingredients. Super processed. Our Feastables bars are five ingredients and all the ingredients are super high quality. It’s the perfect middle ground where I could take it a little more extreme, but then I just guarantee you no one would f**king buy it.”

The YouTuber went on to reveal his plans for a chocolate bar that’s a mix of Kind and CLIFF bars, but says that “if only 100 people buy it, then it’s not really accomplishing anything other than virtue signaling.”

Donaldson is aware of his food’s content and hopes to “wean” his buyers off Hershey’s bars, saying he doesn’t “wanna just kill people by giving them super processed s**t.”

Donaldson’s latest comments follow his appearance on the FLAGRANT podcast, where he recounted his surprising meeting with A-List actor Leonardo DiCaprio and teased his future plans for a Netflix show.

YouTuber MrBeast revealed on Full Send Podcast that he once got paid $250k just to send a video saying “Hi” to a Billionaire’s son.

However, MrBeast did not reveal the name of the billionaire nor did he give a clue who this wealthy person was.