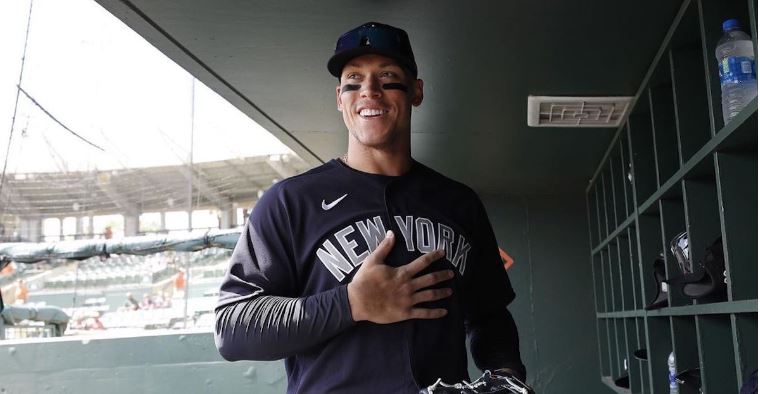 What is Aaron Judge’s net worth? The Baseball player has an impressive fortune. Details about his finances.

Judge was unanimously selected as the American League Rookie of the Year in 2017 and finished second in voting for the AL Most Valuable Player Award that year.

This year, Aaron has been chasing the single-season home run record in the MLB. Although there is much controversy over who holds the record, Aaron officially became the fifth player in major league baseball history to hit 60 home runs in a single season on Sept. 20, 2022. Talk about making history!

There’s no denying the fact that he is incredibly talented in his sport of choice, but fans want to know more about his finances. Here’s what curious fans should know about his worth.

What is Aaron Judge’s net worth?

Aaron Judge is an American professional baseball player who has a net worth of $20 million, according to Celebrity Net Worth.

His primary source of income is his profession as an athlete. In that, he makes money from different avenues; sponsorships, and endorsements.

Aaron Judge has a number of lucrative endorsement deals notably with Pepsi and Adidas. From 2014 to 2018 he was an Under Armour athlete.

A day after the Yankees clinched the American League East title, Aaron Judge hit his 61st home run of the 2022 season during the team’s Wednesday night game against the Toronto Blue Jays. That’s right — after seven games without a home run, he launched the historic homer on Sept. 28, 2022, and officially tied the late great Roger Maris’s American League record.

Aaron told ESPN, “It’s an incredible honor, getting a chance to be associated with one of the Yankee greats, one of baseball’s greats, words can’t describe it … That’s one thing so special about the Yankees organization, is all the guys that came before us and kind of paved the way and played the game the right way, did things the right way, did a lot of great things in this game and getting a chance to be mentioned with those guys now is, I can’t even describe it, it’s an incredible honor that’s for sure.”

“Getting a chance to tie Roger Maris … you dream about that kind of stuff, it’s unreal,” Aaron concluded.

According to the MLB, Aaron managed to get his 61st home run ball back and gave it to his mother, Patty.

“She’s been with me through it all,” Aaron told the press. “From the Little League days, getting me ready for school, taking me to my first couple of practices and games, being there for my first professional game, my debut and now getting a chance to be here for this — this is something special, and we’re not done yet.”