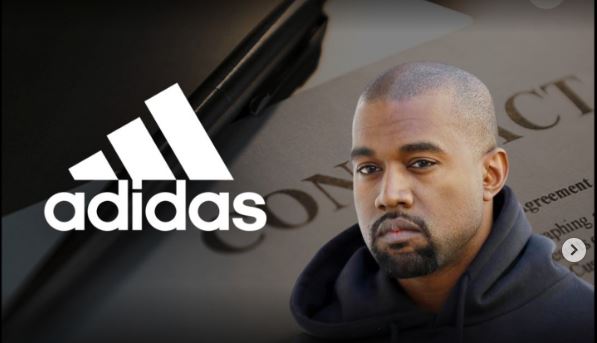 Kanye West is leveling a full-fledged attack against Adidas.

Kanye West is someone who is very adamant about getting what he wants. Years ago when Ye first said that he wanted to get into fashion, he was laughed at. There were people who felt like he could never attain success in that field and that the deck was stacked against him. In the end, Ye proved everyone wrong, coming through with two incredibly successful shoes with Nike, while going on to create a billion-dollar imprint with Yeezy.

Unfortunately for Ye, the path to this storied success hasn’t always been easy. When he was with Nike, he felt like he wasn’t getting enough royalties. He was also very clear about the fact that Nike wasn’t giving him enough creative control. Once he released the Nike Air Yeezy 2 “Red October,” Ye was out of there and he ended up joining Adidas. Since that time, Kanye has come out with all sorts of unique sneakers that have landed in the hands of tens of millions of people, all around the world.

This success has made Yeezy a multi-billion-dollar operation that seemingly cannot be stopped. Kanye has secured collaborations with GAP and Balenciaga and for the most part, he appears to be on top of the fashion world. In Kanye’s eyes, however, he is still being severely disrespected by the three stripes brand.

The first inkling of Kanye’s displeasure with Adidas came on August 2nd during Yeezy Day. At the time, Kanye was fairly dormant on social media, but Adidas’ yearly Yeezy sale had Kanye feeling slighted.

Kanye has always been vocal about things that upset him, although this was the first time he was publicly angry with Adidas. Up until this point, everything had (seemingly) been going smoothly. In fact, many fans believed that all of the new Yeezy colorways were picked out and approved by Kanye. As it turns out, this is not the case at all, and it is a huge reason why Kanye is now leveling an all-out war against the brand.

According to Sole Retriever on Instagram, Kanye’s contract with Adidas makes it so that Ye is actually licensing the Yeezy name to Adidas. The three-stripes brand owns all of the patents to Kanye’s sneaker designs, except for the Yeezy slide. This means Adidas can make any colorway they want without having to warn Ye first. Having said that, Kanye does get a 15 percent royalty on all Yeezy sneakers sold, but for Ye, Adidas’ treatment of his shoes is still unacceptable.

Now, Kanye wants to take back control of his brand. This has led to a plethora of Instagram posts over the past week in which Kanye has been ultra-critical of Adidas and their latest executive hire, Daniel Cherry who used to be a General Manager at DC Comics. Kanye believes Cherry is too lame to do the job, and in a series of posts, Kanye has made fun of the man’s style, noting that Adidas is going to go down the drain if they keep Cherry in a position of power.

Throughout his recent Instagram campaign, Kanye also made the revelation that he is trying to get out of his Adidas deal early, which does not technically expire until 2026. In an Instagram post from about two days ago, Kanye stated that Adidas tried to pay him $1 billion to go away. Ye was not about to accept that as he is still owed $500 million in royalties.

“The fact adi felt they could color my shoes and name them without my approval is really wild,” Kanye wrote. “But I promise everyone adidas is not as wild as me I really really care about building something that changes the world and something I can leave to my kids They tried to buy me out for 1 billion dollars My royalties next year are 500 million dollars alone Daniel Cherry Pop makes 2 million a year Yeezy’s are 68 percent of adidas on line sales You guys thought cause DCP Daniel Cherry Pop went to Warden that he could politely give me a billion dollars to hand everything I built over.”

Although he is mostly focused on Adidas right now, Kanye is also leveling very similar attacks against GAP. When it comes to both brands, Kanye feels like his IP is being infringed upon. He has accused Adidas of making slides that are too similar to his Yeezy slides, and he has also called out GAP for making garments that are similar to what he has already done for them.

Can Kanye Make It On His Own?

Given this recent turn of events, there is one question we need to ask– does Kanye have the resources to make the Yeezy brand successful on his own? Many of you are probably screaming “yes” at your screens right now. This doesn’t take into consideration the kind of factories that Adidas has in place to manufacture Yeezy sneakers. Not to mention, Adidas has decades of experience when it comes to scaling businesses, marketing products, and shipping them out to retailers on time. While Yeezy has made Adidas cool again, it is vital to mention that without Adidas’ help, Kanye would have had a very difficult time making Yeezy as big as it is today.

Regardless, Kanye is a very persistent person, and late last night, Kanye made it clear that he will continue to fight for his company, his story, his family, and his voice.

At this point, there is no telling what Adidas is going to do. They have been subjected to a whole bunch of negative press, and it wouldn’t be surprising for them to drop Ye just so they can get this PR nightmare off of their back. At the same time, billions of dollars are at stake, and Adidas is a much stronger company with Kanye on board.

Stay tuned for all of the latest updates regarding this developing story.