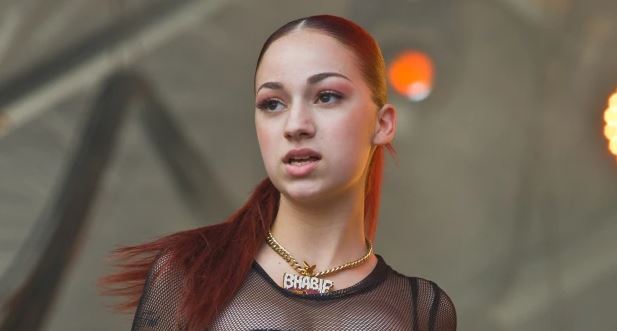 How much is Bhad Bhabie worth? The model and rapper once got her fans talking over her OnlyFans earnings but what is her actual net worth?

The Florida native shot to fame on an episode of Dr Phil in 2016, after being brought on the show by her long-suffering mom Barbara Ann. On the show, she uttered the phrase, “Cash me ousside, how bout dah?”, which became a viral video meme and catchphrase.

Aside from rapping, the 19-year-old shocked fans when she revealed she has earned a staggering amount on OnlyFans since joining the X-rated platform in 2021.

Bhad Bhabie is now a multi-millionaire rapper and model. She recently launched a scholarship fund for trade schools and donated $1.7 million for her ‘Bhad Scholarship” project. So, who exactly is Bhad Bhabie and how much is she worth?

Who is Bhad Bhabie?

She first became known from an appearance on Dr. Phil in September 2016, in which she uttered the phrase, “Cash me ousside, how bout dah?”, which became a viral video meme and catchphrase.

Barbara revealed that she was pulling her hair out over her child – who would run away four times in one day and steal her credit cards.

While her life was laid bare on camera, Danielle became annoyed at the audience members who were laughing at her.

Turning to threats, Danielle asked the audience: “Catch me outside, how about that?”

But, because of her accent, it sounded a lot more like: “Cash me ousside, how bow dah?”

This has become her signature catchphrase – and a meme that has gone all over the internet.

Bhad Bhabie is Danielle’s alter-ego for her rap career. She has had three songs on the Hot 100 Billboard.

The teen launched her first single These Heaux in September 2017 and became the youngest person ever to hit the Billboard 100 charts.

She then recorded a new single and released a music video where she appeared to mock Kylie Jenner.

In September 2018, the newbie singer’s fans accused Eminem of copying her song Hi Bich in terms of flow.

Meanwhile, Eminem’s fans insisted that the similarity between his song Not Alike and Danielle’s Hi Bich is due to satire, as the song mocks multiple artists including her.

She’s become something of a celebrity, with Danielle reportedly charging $44,000 for a public appearance at Rolling Loud Music Festival in 2017.

According to Wealthy Gorilla, Danielle’s net worth in 2020 was $4 million, due to her role as a professional rapper and social media personality.

How much does Bhad Bhabie make on OnlyFans?

In April 2021, Danielle launched her OnlyFans page just days after turning 18 and bragged that she made $1 million in her first six hours.

While the content does not have to be explicit on the site, it’s best known for its involvement in the sex industry and is used by celebrities like Cardi B, Bella Thorne, and Jordyn Woods.

She raked in more than three-quarters of a million from her baseline subscriptions, which cost $35 a month at the time.

Bhad Bhabie – real name Danielle Bregoli – shared a screenshot of her eye-watering earnings on the subscription service on Instagram on Monday.

They revealed that she had 16million subscribers and made $16,000million in tips and $25million from messages.

Danielle – who joined OnlyFans last April when she turned 18 – captioned it: “Go cry about it b***h.”

How did Bhad Bhabie make money?

She has raked in the cash from her music career and a handful of smart endorsements but told TODAY that her OnlyFans account is really taking her to the next level financially.

“My main business manager, who’s been with me since I was like 15, when my mom had control of everything, tells me, ‘Everyone thinks that you’re going to blow it, but I think you’re going to do great,'” she told the outlet.

“And when I turned 18, I started making so much money when I started doing OnlyFans.

“And when I say making money, I mean I could retire right now if I wanted to,” she added.

Back in August, Danielle revealed she’s a multimillionaire and could retire if she wants to.

What is Bhad Bhabie’s net worth?

Despite making over $50 million from OnlyFans, Danielle Bregoli, better known as Bhad Bhabie, is worth a reported $20 million, according to Celebrity Net Worth.

Bhabie has only been releasing music since 2017 but has already proved that she can make some serious hits.

At 17 years old, Bhabie was the youngest female artist to ever make it on the Billboard Hot 100 chart.