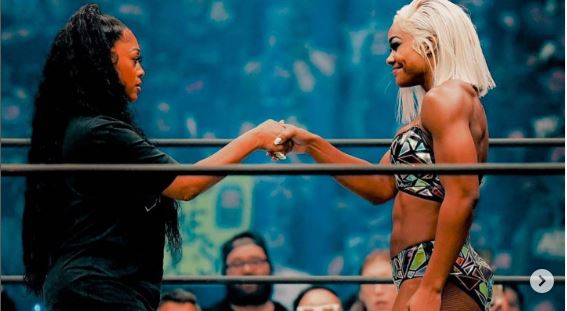 Katrina Laverne Taylor, known professionally as Trina, has been in the rap industry for decades. Hailing from Miami, Florida, the 47-year-old is known for her vulgar lyrics and unwavering confidence.

While her leading talent is rapping, Trina has appeared in a couple of movies and reality television shows, but recently, she’s taken on another hobby– wrestling.

Is Trina a WWE diva?

Earlier this week, the rapper revealed that she would be participating in a wrestling match series. Ali Elite Wrestling is considered the second largest wrestling promotion behind WWE. Founded in 2019, the show created its spin-off, AEW Rampage, a year ago. The show allows the biggest stars from AEW’s original platform to compete against each other.

In an effort to promote the AEW Grand Slam, Trina did a face-off with the title holder, Jade Cargill. In the clip, the rapper appeared alongside wrestler Diamanté, hoping to psych out the competition.

Yesterday (September 23), the championship match was held. Trina’s companion ultimately lost the fight, forcing her to join the winning team.

As Diamanté lay on the floor, the rapper pulled her up by her hair and knocked her back to the ground. With the audience erupting in awe, the commentators said, “Come on, Trina. I guess baddies stick together. Who can you trust anymore?”

In other news regarding Trina, she is set to receive the “I Am Hip Hop” honor at the 2022 BET Hip Hop Awards. Airing on October 4, the show will be hosted by Fat Joe with special performances by GloRilla, Moneybagg Yo, EST Gee and more.