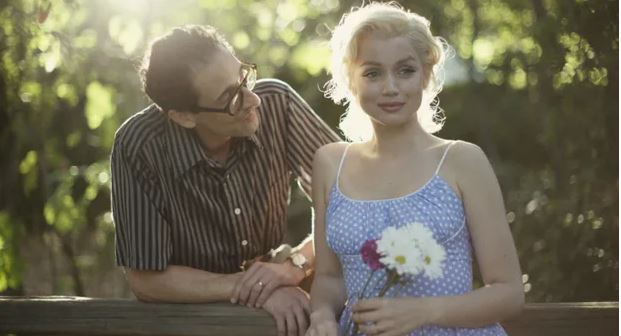 Born in the city of Los Angeles, the actress was a product of an affair between her mother, Gladys Pearl Baker, and her co-worker Charles Stanley Gifford. Early in Marilyn’s childhood, her mother was committed to a mental hospital.

Marilyn spent her adolescent years moving from one foster home to the next as a ward of the state. At 16, she took her first husband and set her sights on the spotlight. It wasn’t long before she rose to fame, but the road to success wasn’t easy.

Netflix’s Blonde documents the life and times of the late bombshell. But there were a couple of questions left unanswered. All of us can agree that Marilyn was — and will always be — a timeless beauty.

Who are the cast of ‘Blonde’?

There have been countless movies, books and documentaries made about late Hollywood icon, Marilyn Monroe, but the latest offering, Blonde, has generated plenty of conversation.

Andrew Dominik’s film, created for Netflix, has been a hot topic of late not only because of its content (some have branded the movie “exploitative”) but because of its glittering, all-star cast.

Blonde, which was adapted from the 2000 fiction novel of the same name by Joyce Carol Oates, sees Ana de Armas put on a stellar performance as Norma Jean. But who else is in the film? Meet the full cast here…

Despite mixed reviews from critics on the film itself, Ana de Armas is receiving wide praise for her performance as Marilyn. The star portrays the icon from her humble beginnings, when she was known by her real name, Norma Jeane, to her glittering career as a global icon.

Film fans will definitely recognise Ana from her previous roles in titles such as Knives Out, The Gray Man, No Time to Die and Blade Runner 2049.

Oscar-winning actor Adrien Brody portrays playwright Arthur Miller. Arthur was considered one of the great American playwrights of his time and was married to Marilyn Monroe (her third husband) for five years.

Adrien is perhaps best known for his role in The Pianist, for which he won the Academy Award for Best Actor, becoming the youngest male winner at the time, but he’s also been in films including The Thin Red Line, The Darjeeling Limited and The French Dispatch. He also recently starred in the most recent series of the TV shows Succession and Peaky Blinders.

Joe DiMaggio was Marilyn’s second husband and was famous for being a New York Yankees baseball player. Their marriage only lasted nine months and there were rumours of violence in their relationship, however, after their split, they remained close until her sudden passing.

Playing Joe is Bobby Cannavale who is known for his roles in The Irishman, Nine Perfect Strangers and The Watcher.

Caspar Phillipson portrays John F. Kennedy, the 35th president of the United States. In Blonde, JFK is portrayed as Marilyn’s lover and abuser. Although there was much speculation about the intricacies of Marilyn and John’s relationship over the years, it was never confirmed.

The actor playing the late president is Caspar Phillipson who is no stranger to portraying the Kennedy brother as he also played him in the film, Jackie.

Gladys Pearl Baker was Norma Jeane’s mother and it was widely known that the mother and daughter did not have a close relationship.

Playing Gladys is Julianne Nicholson who is known for her previous work in Tully, Seeing Other People, Masters of Sex and Mare of Easttown.

If the name wasn’t a giveaway, Charlie ‘Cass’ Chaplin Jr was the son of fellow Hollywood icon Charlie Chaplin, famed for his work in silent movies. Charlie followed in his famous father’s footsteps and became an actor and he and Marilyn were close friends and rumoured lovers.

Xavier Samuel, who portrays him, has been in Adore, The Loved Ones and A Few Best Men.

Jess Flynn, known as Miss Flynn, was portrayed in Joan Oates’ novel as a friend of Marilyn’s mother, Gladys, who also gave voice lessons to Norma.

Playing Jess is Sara Paxton who has been in movies like The Front Runner and Aquamarine.

Blonde was released in select cinemas on Friday 23rd September and is available to stream on Netflix from Wednesday 28th September. Check out more of our Film coverage or visit our TV Guide to see what’s on tonight.