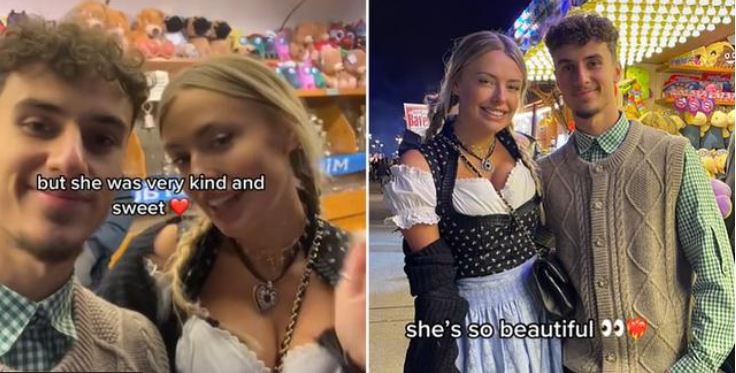 A TikToker found himself going viral online after approaching streamer Corinna Kopf at Oktoberfest to give her a gift.

Corinna Kopf is an extremely popular online personality. Boasting over 1 million followers on Twitch, where she streams a variety of games, she’s also got a lucrative career on OnlyFans and a prosperous following on Instagram.

As such, it makes sense that her content garners quite a few eyeballs — but one small-time TikToker had no idea her presence in one of his videos would skyrocket him to viral status.

TikToker ‘Edon-Sama‘ is a self-professed fan of Corinna Kopf. He ended up noticing the streamer at Oktoberfest, a German festival held in Autumn.

Determined to meet the internet-famous star, Edon purchased a fake rose for her and approached Kopf while she was in the middle of playing a game at a carnival stall with friends.

Their interaction was nothing short of adorable, and Edon even got a hug out of the deal. However, he didn’t expect that his TikTok documenting his meeting with Kopf would go viral.

“I was so excited that I trembled,” he admitted. “But she was very kind and sweet. She’s so beautiful and promised to come to Albania.”

Edon’s clip has racked up over 3 million views since being posted on September 26, with commenters both admiring the TikToker and poking fun at him for asking Kopf for a hug.

That’s not all; Edon’s rose also featured in one of Corinna’s recent Instagram posts, which has also racked up just shy of one million likes.

There are far worse ways for fans to go viral when meeting their favorite content creators, and it looks like Edon definitely got the more favorable outcome — unlike a fan who asked out Pokimane during a TwitchCon meet and greet.