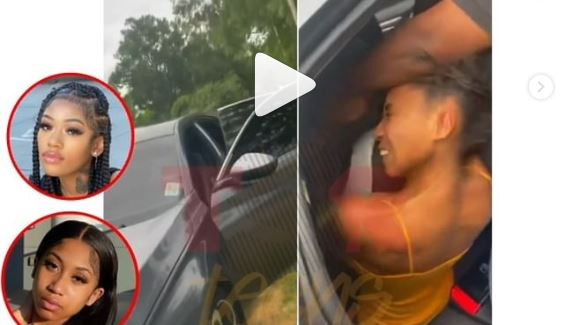 Carena Vonchae, the girlfriend of JayDaYoungan has pulled out a tussle after the rapper’s baby mama, Jordan B seemingly made fun of their mischarge.

Looks like Carena and Jordan B actually linked up to put the paws on each other!

If y’all remember, Jordan B, the mother of JayDaYoungan’s son wished death on Carena’s child with Jay during the pregnancy.

Once the baby passed Jordan took to Twitter with some insensitive death tweets.

The two of them share their thoughts following the car tussle and it looks like Carena still wants all the smoke Jordan B.

How it all happened

Javorius Tykies Scott, known professionally as JayDaYoungan, is an American rapper and singer. He is best known for his singles “23 Island”, “Elimination” and “Opps”, which have received 49, 27, and 26 million respective streams on SoundCloud as of November 2020.

The 23-years-old rapper from Bogalusa, Louisiana, United States, and his new model and YouTuber girlfriend Caren Vonchae took to Instagram to share sad news about their loss.

According to Carena, on Father’s Day June 10, 2022, she and her boyfriend JaydaYoungan lost their precious gift from God whom they planned to name Amazi Breeze Scott to a miscarriage.

Carena shared a picture of her holding her baby’s hand and added hurtful words as her caption, Click here to read more.

Shortly after Jaydayoungan and his girlfriend announced she had a miscarriage, his baby mama Jordan B took to Twitter to celebrate.