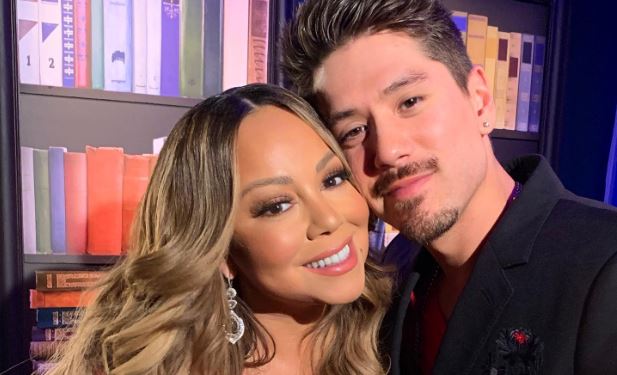 Want to know more about Mariah Carey’s dating history? Or are you looking for the boyfriends Mariah Carey has dated? Read on to find out more.

Some of them didn’t belong together, but Mariah Carey’s former relationships led her to meet her current beau, Bryan Tanaka.

The backup dancer and choreographer maintain a private relationship with the “All I Want for Christmas Is You” artist. Mariah has even made it a point to avoid speaking publicly about their romance. In 2017, she told the Associated Press she didn’t “feel comfortable” talking about her “personal life.”

“Me and my boyfriend don’t want to do that,” she added at the time.

However, Bryan chose to give his lady a rare tribute via Instagram upon the release of her memoir, The Meaning of Mariah Carey.

“The world gets to know you a lot more today,” he wrote in September 2020. “Witnessing you write, record, and create this masterpiece was magical. You inspire me all the time. I’m so happy for you. I’m so grateful to love and support you in all you do. Congratulations babe! You did it!”

After that, Bryan began sharing more moments of their relationship with his followers. The following year, he revealed the date of their anniversary was March 27, posting a selfie of them posing together. “Today is my favorite day. Happy anniversary my love!” the dancer wrote via Instagram that day.

Before dating Bryan, Mariah was married to Nick Cannon from 2008 to 2016, sharing twins Morrocan and Monroe. In a 2020 interview with Variety, Nick opened up about their whirlwind romance and their decision to get hitched just weeks after they began dating.

“We had very sensible conversations,” the comedian recalled. “We were both at this place where relationships really aren’t our thing, but we like each other. We talked everything out … We talked about how much fun it would be if we just got married three weeks into knowing each other. It was more that whimsical fantasy idea of, ‘Let’s have as much fun as we possibly can and when it no longer feels like fun, when it feels like a task and a job, then we should amicably move on.’”

When it comes to her love life, though, the “We Belong Together” singer has previously stated she hasn’t had many relationships.

“I haven’t had that many, but there has been a variety pack,” Mariah told Cosmopolitan in 2019. “I’ve only been with five people in my life, so I’m kind of a prude, honestly, compared to most others in the field.”

Despite what she said, some have speculated on her dating life and believe she was briefly linked to a few other celebrities, including Eminem.

Scroll through the gallery to see Mariah’s former and rumored relationships.

Despite their age difference of 21 years, Mariah’s first public relationship was with Sony Music executive Tommy Mottola, who she married in June 1993 and divorced in March 1998. She has since spoken extensively about the relationship, telling Cosmopolitan in July 2019 that she felt like she had little freedom in the relationship. “You might want to picture a child bride,” Mariah said. “There was a conscious effort to keep me as this all-American, whatever that means, girl. It was very controlled. There was no freedom for me as a human being. It was almost like being a prisoner.”

She revealed more details about the relationship in her memoir, confessing that she kept a secret “to go” bag in case she ever needed to escape. “It felt like he was cutting off my circulation, keeping me from my friends and what little ‘family’ I had,” she wrote, per Us Weekly. “I couldn’t talk to anyone that wasn’t under Tommy’s control. I couldn’t go out or do anything with anybody. I couldn’t move freely in my own house.” Later, she added, “Many reasonable people questioned why I married Tommy. But none of them questioned the decision more than I did.”

In her memoir, Mariah revealed that she and Derek met at a dinner outing and her assistant helped her keep the romance a secret. “I enrolled my assistant,” she wrote, per Vulture. “We’d stage an errand and leave in her car, and I would talk to him. Sometimes we would go to her house, and I’d sit in her modest little living room and talk to him in a whisper — I was that afraid of Tommy.”

Eventually, she and Jeter had a rooftop date, which inspired her song “The Roof,” according to Mariah’s August 2020 interview with Vulture. Though it’s unclear how long they dated or why they split, it doesn’t seem that Mariah has any hard feelings. As she told Oprah, “Honestly, I don’t think it was like, ‘Oh my gosh, he was the love of my life.’ At the time I did, because I didn’t think I’d ever meet someone who [didn’t feel superior to me].”

For nearly four months, Mariah was reportedly dating the Dutch model in 1998.

According to Marc Shapiro’s 2001 biography, Mariah Carey, Mariah met Mexican singer Luis Miguel in Aspen, CO, in December 1998. Apparently, the real estate agent who rented Mariah her Aspen home was friends with the person who rented a house to Luis, and the two friends played matchmaker. Things became tense while Mariah was filming Glitter, as there were rumors that she and co-star Eric Benét (who was dating Halle Berry at the time) were more than friends, which she denied. After three years together, Luis reportedly ended the relationship in 2001 because Mariah wanted to have children and he did not.

Though it’s unclear when (or if) Mariah romanced music producer Mark Sudack (who was the executive producer on her albums The Emancipation Of Mimi and E=MC2), Us Weekly reported in May 2008 that the two dated “for nearly four years” and “secretly split” earlier in the year.

According to a source for the magazine, Sudack was “shattered” about the news of Mariah’s quick marriage to Nick Cannon. “Everyone is scared to call him because no one knows what to say,” a friend of Sudack reportedly claimed to Us Weekly. “He never thought she would go off and marry someone else. He’s heartbroken and shocked.” Mariah has never publicly spoken about the relationship.

While the “Real Slim Shady” rapper told Rolling Stone in 2002 there was “truth” to the relationship rumors with Mariah, she later denied it in an interview with Maxim that year.

As costars in the movie Glitter, Mariah and Eric were rumored to be dating from 2000 to 2003.

In 2005, Mariah began romancing model Christian Monzon, who she met on the set of her music video “Don’t Forget About Us.” However, she played it coy when asked about the relationship during a January 2006 interview with The Mirror. “Okay, he’s a very nice guy, he’s been in a fabulous Dolce & Gabbana advert — did you see it? — and we’ve had some nice conversations and, um, a nice time,” she said, adding, “Okay, I’ll say he definitely did a very good job in the video.” It’s unclear how long the two dated or why they eventually split.

Though the two first met in 2005 at the Teen Choice Awards, they didn’t start dating until three years later, right around the same time that Mariah released her music video for “Bye Bye,” which featured Nick. Then, after just six weeks of dating, Mariah tied the knot with comedian Nick Cannon on her private island in the Bahamas in April 2008. Two and a half years after walking down the aisle, Mariah announced her pregnancy, and the couple welcomed twins Monroe and Moroccan in April 2011 on their three-year wedding anniversary.

According to her memoir, she and Nick “got married so quickly” because they wanted to start a family. “I sincerely thought I would never have kids. Our relationship changed that,” she wrote, per Us Weekly.

In January 2015, TMZ shocked fans by announcing that Nick had reportedly filed for divorce from Mariah the month before. As Mariah wrote in her memoir, “Making the necessary adult adjustments to being working parents in entertainment took its toll on our relationship, and the end of our marriage came fast, as it began.”

By November 2016, the divorce was finalized, and the two agreed to joint custody of their children. Since then, the exes have become amicable co-parents and still speak fondly of each other. As Nick told Variety in June 2020, “We’re doing whatever we can to make sure their upbringing is as healthy as can possibly be and that we’re as healthy as we can possibly be. And that’s where we are to this day.”

Just like Luis, Mariah first met Australian billionaire James Packer in Aspen, CO. On a November 2015 episode of The Steve Harvey Show, Mariah said, “We first met in Aspen. A couple of years ago we were at the Hercules premiere. We were talking and laughing and people were getting mad at us and stuff like that. So we hit it off.” By June 2015, the couple was official, and in January 2016, James decided to pop the question.

Things seemed to be going well until September 2016, when the two took a disastrous trip to Mykonos, Greece. A rep for James later told Entertainment Tonight, “Mariah and James had a fight in Greece, and have not seen each other since,” though it’s unclear what the argument was about. By October 2016, a source for People reportedly claimed that the couple had been broken up for a month. A year later, Packer said he regretted the relationship during an October 2017 interview with The Australian. “I was at a low point in my personal life,” he said. “She was kind, exciting, and fun. Mariah is a woman of substance. But it was a mistake for her and a mistake for me.”

Packer wasn’t even mentioned in Mariah’s memoir, because — according to Mariah — the relationship wasn’t significant to her. “If it was a relationship that mattered, it’s in the book. If not, it didn’t occur,” she told The Guardian during an October 2020 interview. When asked specifically about Packer, she said, “We didn’t have a physical relationship, to be honest with you.”

Mariah was first linked to longtime backup dancer Bryan Tanaka in November 2016, not long after splitting from James. By February 2017, the couple was Instagram official, but just a few months later, a source for TMZ reportedly confirmed their split after five months together. They later rekindled their romance and have been in an on-and-off-again relationship ever since, though Mariah does not mention the relationship in her memoir. Bryan made his most recent appearance on Mariah’s Instagram grid in April 2020, and Bryan took to Instagram to celebrate Mariah’s memoir on the day of its publication with a sweet post, so it seems that the two are currently together.