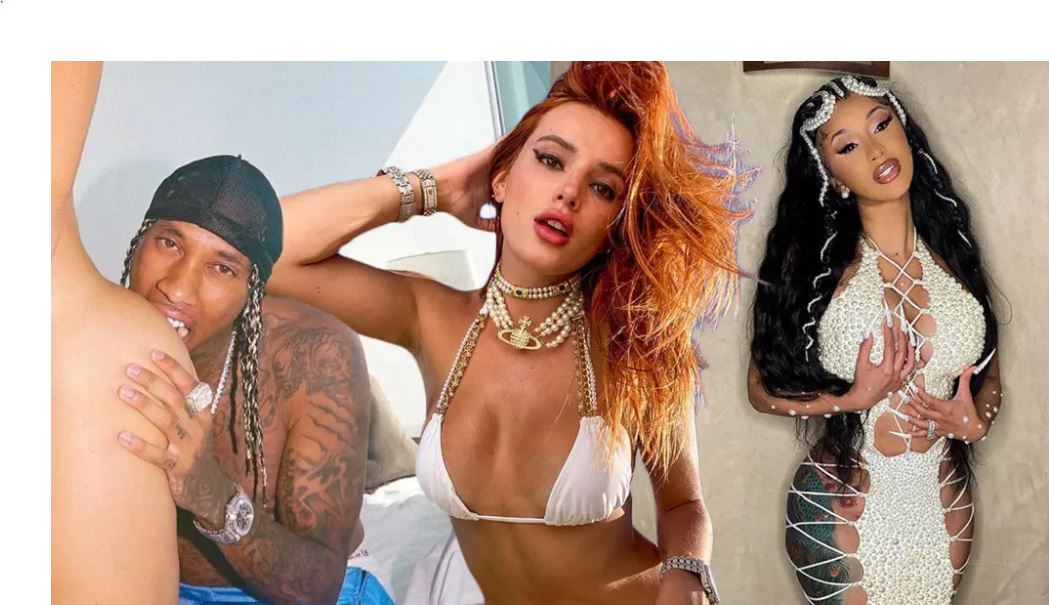 Dozens of celebrities have hopped on the bandwagon of joining the mostly-racy adult content platform, with some stars reeling in the big bucks as a result.

Here is a list of all the major celebs who have OnlyFans pages.

“Ready…here we go,” she wrote on Instagram of her OnlyFans page, which goes for $25 a month.

The “Real Housewives of Beverly Hills” alum’s announcement came just one week after her daughter, Sami Sheen, whom she shares with ex-husband Charlie Sheen, made waves for launching her own account.

Richards and Sheen’s eldest daughter, Sami, joined OnlyFans in June 2022 with a sultry swimsuit snap after turning 18 in March.

After news broke, Richards told Page Six exclusively, “Sami is 18, and this decision wasn’t based on whose house she lives in. All I can do as a parent is guide her and trust her judgment, but she makes her own choices.”

Charlie, however, told us, “She is 18 years old now and living with her mother. This did not occur under my roof. I do not condone this, but since I’m unable to prevent it, I urged her to keep it classy, creative and not sacrifice her integrity.”

Former “Baywatch” babe Carmen Electra joined OnlyFans in May 2022 on the heels of her 50th birthday.

The ’90s sex symbol was inspired to reconnect with her fanbase after she reached the milestone birthday in April and was looking forward to this “new, celebratory chapter of her life.”

“Guess who just joined OF!!!” she announced on Instagram at the time.

Subscriptions for access to her page are free but the model is offering VIP access to anyone who tips $200.

Shanna Moakler launched her OnlyFans account in June 2021 to give fans a “fun” look at the many facets of her life.

“I’m very comfortable with nudity. I always have been being a former Playmate, being in Maxim,” she told Page Six. “I’m not trying to get crazy in my career now at my age, but I’m definitely willing to have some fun and make it a great experience for everybody.”

Larsa Pippen was criticized for seemingly capitalizing off her affair with Malik Beasley by launching an OnlyFans account in the midst of the drama.

“I don’t care what anyone says. Every woman can love and live on her own terms,” the “Real Housewives of Miami” alum captioned an Instagram post.

Larsa Pippen’s dad asked her to shut down her OnlyFans account in October 2022. The 48-year-old reality star admitted she has stopped using the adults-only subscription platform so much because her father “took [her] sexy feel away” with his request and since then, she hasn’t been able to “get back to” where she was on the site.

Rapper Bhad Bhabie launched her OnlyFans account after she turned 18. The “Cash Me Outside” girl claimed she made more than $1 million in just six hours.

“Not bad for 6 hours  we broke the f–k out of that onlyfans record,” she captioned a screenshot of her gross revenue.

In August 2020, Cardi B became one of the first A-list celebrities to join OnlyFans.

The rapper did, however, warn fans right off the bat not to expect any X-rated content.

“And to be clear, no I’m not going to be showing my t–ties, or my p—y, or my ass, just straight up real-life content s - - t. You guys be mad nosy when it comes to my life,” she announced.

Her page originally launched with a $9.99 monthly subscription which she then had lowered to make her page more affordable.

“Teen Wolf” star Tyler Posey made headlines when he joined OnlyFans by posting a nude video for his September debut.

The actor posed naked with only his guitar covering his undercarriage as he sang a song about the subscription-based site in an Instagram post.

“You guys asked for it, and I supplied. I now have an only fans [sic]. Follow the link in my bio and come get wet with me! haha” he wrote at the time, encouraging fans to follow his page.

Bella Thorne broke OnlyFans when she joined the platform in August 2020.

As Page Six previously reported, the site briefly crashed when she joined due to an overload of activity on her page.

The former Disney actress earned a staggering $1 million after just 24 hours on the platform, making her the first content creator on the platform to earn that much money in a single day.

She earned a total of $2 million after two weeks on OnlyFans.

A rep for OnlyFans told Page Six at the time that the “content currently on Bella’s page is all SFW,” and involved no full nudity.

Thorne’s OnlyFans page did cause some controversy amid sex workers, who slammed her page as a scam. Thorne later apologized for “hurting sex workers.”

The reality TV star later revealed that her page was “on fire.”

A subscription to Morgan’s OnlyFans page was free for anyone who signed up for a membership the first week she joined and is now $4.99 a month.

Aaron Carter joined OnlyFans over the summer of 2020, where he’s allegedly been posting some pretty racy photos.

Users can subscribe to the 32-year-old singer’s page for $27 a month.

Shea Couleé joined OnlyFans following her win on the fifth season of “RuPaul’s Drag Race All Stars” in July 2020.

“I’m so excited to be joining the @OnlyFans community!” she tweeted at the time.

Despite OnlyFans’ reputation for X-rated content, Couleé clarified that she would be keeping things PG and is using the platform to give fans an inside look into her life.

“It’s a new platform where I can talk directly to my fans and give them exclusive music, pics, videos and other BTS of my latest releases,” the “Taste” rapper said in a statement at the time, adding, “They can really see more inside my life than ever before, and an intimate look of what I do every day. It’s ‘bout to be lit!’”

His OnlyFans bio reads, “I like you I don’t give af bout yo bf,” and his location is set to “Rack City,” referencing his hit song from 2012.

Blac Chyna is another celeb to dip her toes in the world of OnlyFans.

The model, who shares a son with Tyga and a daughter with Rob Kardashian, launched an OnlyFans page that includes “Foot-Freek Monday’s,” according to her bio.

Sonja Morgan isn’t the only star in the “Real Housewives” franchise to join OnlyFans.

Dorinda Medley joined the platform in order to post about her lifestyle.

YouTube star Tana Mongeau has turned to OnlyFans as another platform to share a look into her life.

The internet personality has made her subscription free for anyone with an OnlyFans membership.

Rose joined the platform in late September 2020, teasing fans with a booty-centric Instagram clip and promising them they would “see EVERYTHING” — with a subscription, of course.

The singer and songwriter joined OnlyFans in October 2020, teasing his arrival on the app with a photo of himself grabbing onto a topless woman’s underwear.

“Come and see ,” he captioned the steamy snap, posting a link to the page.

“I feel like I’ve reached an age and a point in my career where I’m ready to mix it up and be more open with my fans,” he said in a statement. “I’m excited to show my fans a different side of me than they may be used seeing on my other social media accounts.”

According to a press release, fans can expect behind the scenes content from his upcoming projects, exclusive music content and personal photos and videos.

The model told Complex that she believes OnlyFans is a judgment-free platform where she can be her authentic self.

“I saw a beautiful opportunity to show a completely different side of myself that I’ve always wanted to show,” she had said.

“We’re creating art on here; we’re not posting just random selfies,” she said. “There’s going to be really edgy, iconic photos of me on there, and it felt like OnlyFans was the right platform to launch this project because it’s completely different than anything that I’ve ever done.”

Fans can subscribe to her OnlyFans page for a monthly fee of $20.

Chris Brown announced in November 2020 that he would offer subscription-only content for $20 per month.

It’s unclear if the 31-year-old singer will provide any NSFW content like some of his fellow celebrities who joined the platform.

Michael B. Jordan (not yet launched)

Fresh off being crowned People’s Sexiest Man Alive for 2020, Michael B. Jordan got fans’ pulses racing again by announcing he’d be joining OnlyFans.

But his content won’t exactly be racy — the account is set to feature his quarantine mustache with proceeds going to a good cause.

“His name is Murphy. We call him Murph for short. Got an OnlyFans coming soon — eating fruit, all types of crazy stuff, it’s going to get wild,” Jordan said on “Jimmy Kimmel Live!”

He said proceeds will go to a “barber school because during the quarantine, you know, there’s been so many businesses and schools that shut down.”

DJ Khaled and Fat Joe teamed up to launch a joint OnlyFans account in January 2020.

“Link in the bio #FANLUV @fatjoe and I are officially bringing THE LIGHT to @onlyfans I told @fatjoe we need a legendary rematch who you got,” Khaled announced on Instagram along with a video of he and Joe playing basektball. “DJ KHALED OR FAT JOE IF I WERE YOU PUT YOUR MONEY ON ME REMEMBER ALL I DO IS WIN ! everybody SUBSCRIBE and TUNE IN JAN 25!”

But the artist clarified that there would be no raunchy content on their page.

“Let’s be super clear we here only to motivate inspire and spread positive vibes only . THE LIGHT !” he wrote.

Joe commented on the post, writing, “I’m going to destroy you khaled taking no prisoners.”