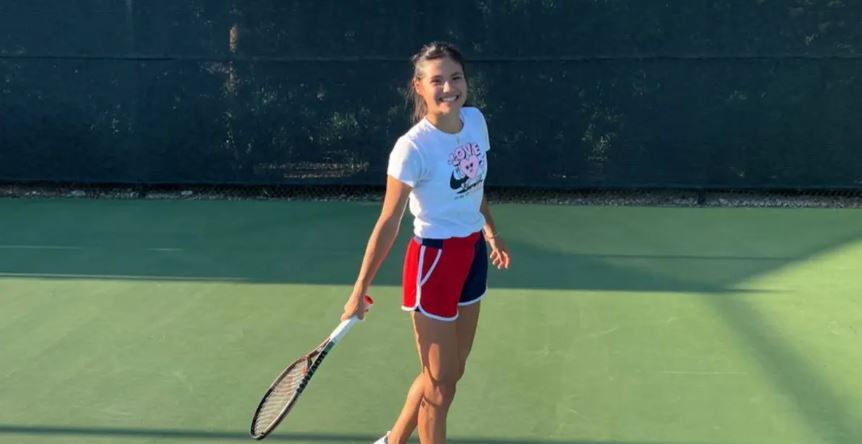 Whether you follow tennis very closely (or, more specifically, the U.S. Open or Australian Open) or you’re just a casual fan of televised matches, there are some pros you learn about anyway. Like Emma Raducanu, who has made a name for herself as a professional tennis player and whose life off the court has garnered a lot of attention as well.

And, despite her seeming to prefer privacy outside of the game, fans want to know who Emma Raducanu is dating.

The 20-year-old tennis star made waves professionally when she was the first British woman to win the U.S. Open in more than 50 years in 2021. Now, she’s ready to defend that title as she continues to play against the top female players of our time, who all have years of professional experience on her.

Naturally, people are curious about Emma when she’s not being a total beast on the court.

Who is Emma Raducanu dating?

Although Emma hasn’t spoken out about relationships as of late and her Instagram doesn’t give her followers any clues about who she’s dating, there have been rumors. In May 2022, The Daily Express reported that Emma had been chatting with French Grand Prix motorcycle rider Fabio Quartararo on Instagram.

According to the outlet, Fabio left a lobster emoji comment on one of her posts. And the fact that she has a vested interest in bikes led some to wonder if there was something more to the exchange.

But other than the rumor, neither Emma or Fabio admitted publicly to dating. And it’s totally possible that Emma just doesn’t have time for dating, especially since she’s part of the U.S. Open again.

Right now, Emma’s Instagram is full of posts about her growing career and about different sponsorships rather than fuel for romance rumors.

Emma Raducanu says she is enjoying working under her new coach Sebastian Sachs and is confident of making significant strides in the next six months.

The British No 1 looked odds-on to miss the Australian Open having suffered an ankle injury in Auckland less than a fortnight ago.

She recovered sufficiently to beat Tamara Korpatsch in the first round but fell to American teenager Coco Gauff 6-3 7-6 (7-4) on Wednesday.

Raducanu declined to say whether she had also picked up an abdominal problem during the match having been seen touching her stomach, but she will prioritise more physical work before returning to the match court with hope of making progress.

The former US Open champion began working with 30-year-old Sachs in December, but he comes with plenty of experience having guided Belinda Bencic to an Olympic gold medal last year and he has also worked with former world No 1 Victoria Azarenka and Germany’s Julia Gorges.

“I just have to review the body right now,” she said. “I’ve had some niggles in the past few months, and I just need to get that sorted, train, and then we’ll see after that.

“I’m really buying into and trusting the work that I’m doing with (new coach) Sebastian (Sachs) and the rest of the team. So I’m feeling good and confident that, in six months’ time, I know it’s not going to be the finished product, but hopefully I would have made strides.”

What did Emma Raducanu compete in before the 2022 U.S. Open?

At just 18 years old, Emma won the 2021 U.S. Open. In addition to that, she won multiple International Tennis Federation (ITF) competitions while she was still in grade school. And in 2018 at Wimbledon, Emma defeated Leylah Fernandez in the second round. She’s still a teenager and already, Emma is a force to be reckoned with.

Emma even has followers and fans in the form of celebrities. Which, if we’re being honest, is every teenager’s dream. Oasis lead vocalist Liam Gallagher once tweeted that Emma is “biblical.” But Emma also recognizes the greats in her sport, which no doubt keeps her humble.

In August 2022, Emma opened up to Today about maintaining confidence in her career.

“Obviously playing Serena Williams and [Victoria] Azarenka, who are both amazing champions, was a really good bit of a confidence boost for me,” Emma told the outlet. “But I think this year has taught me a lot.”

She added that she has been “figuring things out” after having a “stop-start season” in tennis.

“Now, I approach things a bit differently,” Emma said. “I’m not as afraid to make a mistake.”