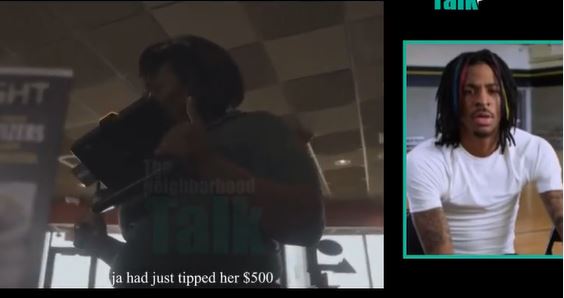 Ja Morant has been hailed by netizens after he tipped a waitress for $500. He got an amazing reaction from the waitress.

Ja Morant is currently one of the best young players in the entire NBA. In just a few years from now, he will likely be the face of the league, and there is no doubt that the Memphis Grizzlies have a very bright future with him at the helm. This is a franchise that has been yearning for a superstar to lead its team, and now, they have one.

Recently, Morant went viral for all of the right reasons. The Grizzlies star was in a restaurant with some of his friends, who were filming him at the table. In the viral clip, the waitress comes up to Morant with his bill and seems to be shocked as he had given her a massive $500 tip.

This led to a wholesome interaction in which the waitress assumed that Morant must play basketball or football. When Morant said he plays basketball, she asked if he had played college nearby. Morant noted that he played in South Carolina, however, he now plays for the Memphis Grizzlies. The waitress was absolutely stunned and when Morant revealed who he was, the woman couldn’t help but run away in shock at whom she had just encountered.

The entire interaction was very wholesome and you can’t help but admire Morant here. Service workers are extremely underappreciated and we’re sure this was the largest tip the waitress had ever seen.

With nothing but bad news all around us, sometimes it’s fun to highlight the good.

watch the video below;