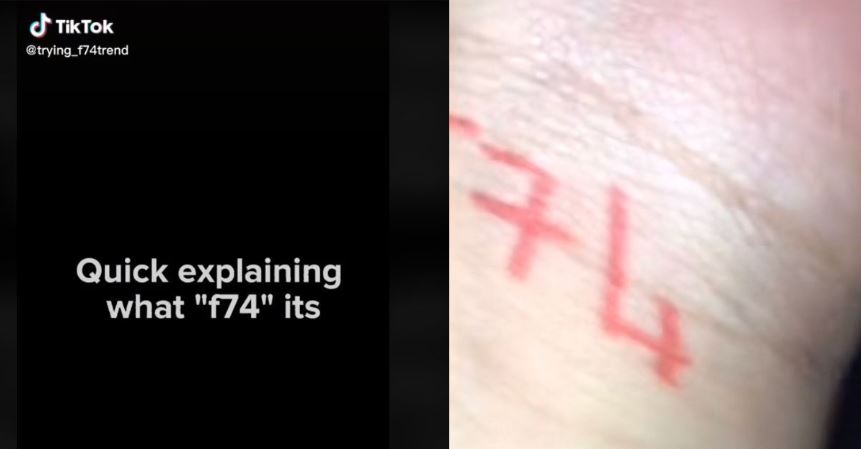 TikTok says writing this number on your wrist before bed will take you to another dimension. More details on the Floor 74 trend.

The latest TikTok challenge sounds like the plot of a sci-fi/horror movie. But unlike most TikTok challenges, this one doesn’t involve filming some type of reaction video for the platform. And that’s mostly because users undergo this challenge while asleep.

Let’s talk about the F74 challenge, which is currently taking the app by storm.

What is the F74 challenge?

According to a video on the platform that breaks down the trend, the F74, or Floor 74, trend hails from Japan and allegedly takes you to a parallel dimension in your sleep. As you fall asleep and sink into this other dimension, you will allegedly wake up in a hallway filled with red-numbered doors. This place is called is Floor 74.

The whole challenge part of being on Floor 74 is to find the blank door without a number on it and exit. You have 10 hours. If you don’t get to the door in time, you will supposedly be stranded forever in the parallel dimension.

However, there are some obstacles along the way. You may feel you’re being followed. And supposedly if you look back, a mysterious figure will take you into a room with no doors and windows. The only way to escape that room is to bang loudly enough on the walls and hope someone finds you.

To try out the challenge, all you have to do is write F74 on your wrist with a red marker before you fall asleep.

Is the F74 challenge real?

There are mixed reviews. Many claim it is bogus, but it’s unclear if they’ve actually tried it.

One TikTok user who tried the trend gave a detailed review about its legitimacy. She claimed that the first time she tried it, it didn’t work. She noted that it was probably because she wasn’t thinking about F74 when she went to sleep — despite writing it on her wrist.

She gave F74 another try though and made sure to think about it a lot as she drifted off. This time it worked. She recalled waking up in a hallway with doors and alarms going off. Unfortunately, she could not find her way out so she opened one of the doors and claimed that a woman covered in blood killed her. Then she woke up in real life to share the story with us.

Pretty chilling, if you ask us. So, is this trend worth trying? Yes, but only if you like nightmares.