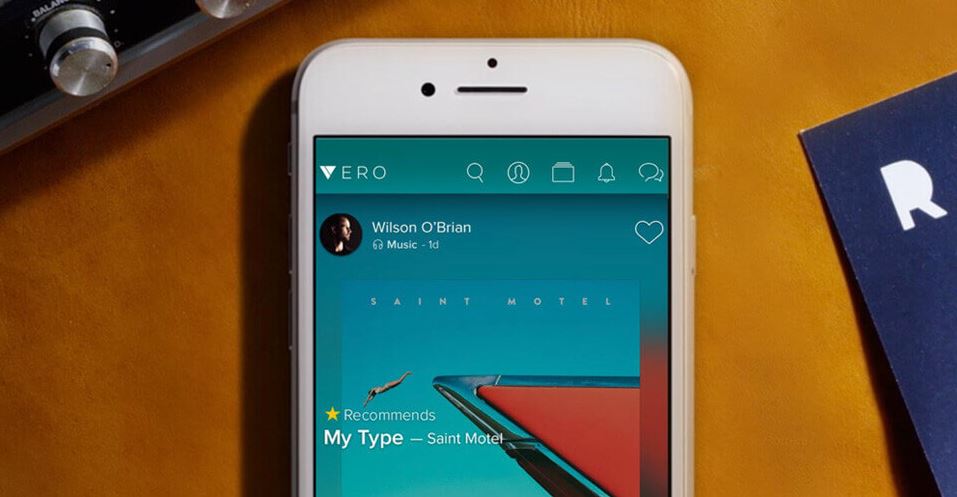 Vero is a social networking site that has the central selling point of being ad-free and not based on an algorithm.

Unlike Twitter or Insta where you can just post a message or a picture, with Vero you add movies, tv, music, books, places, photos, or links each time. Plus, it has the bonus feature of allowing you to easily choose exactly who sees each of your posts.

You can choose exactly who sees your content each time by splitting your followers into four groups: close friends, friends, acquaintances, and followers. None of your followers will know which group they are in and you can turn off individual post types from the people you follow eg. if your mate keeps posting too many bad TV recommendations, you can filter them out.

Is Vero Still A Thing?

The app was launched officially in 2015 as an alternative to Facebook and their popular photo-blogging app Instagram. Within weeks of its release, the app surged in popularity although users expressed mixed reports with some feeling confused about how the app worked. However, Vero was not able to handle that load and many were disappointed by failed sign-ons and several other issues that resulted from the load.

Issues with signing up and the speed of the app itself have proved a major problem as word spread about the service online.

Others also pointed out issues around content copyright ownership in the company’s terms and conditions although these have since been updated.

“We’re experiencing an outage due to heavy load. Apologies again for the issues we’re having. We’re working to restore things. We really appreciate your patience.” — the Twitter page of the app company wrote on February 25, 2018. while addressing the technical difficulties.

In December 2020, Vero released its most significant update to date, VERO 2.0 which introduced new features including voice and video calls, game and app posts and bookmarks, and refinements to the UI.

Nevertheless, Vero is still alive and has been releasing major updates about the video and photo-sharing platform. For many, it is still the better Instagram from a photography perspective. Especially since it is way more than Instagram in some aspects and way less than Instagram in others.

Is Vero Free To Use?

Currently, the app is free to download but the company has already made clear that they will eventually be imposing a subscription service with an annual fee which they claim will be the price of a couple of cups of coffee. They were running a promotion at the early release stage of the app where the first million users to sign up get free membership for life.

In order to provide that ad-free experience, they do need to generate revenue in some way. The subscription fee – which will likely be less than the price of a cappuccino at Starbucks once every 365 days – will allow them to keep advertisers out and the customer experiences their main and only concern.

Is Vero Safe To Use?

Honestly, it seems to be just as safe as any other social media app we’re all already using. There’s always the risk of impersonators and identity thieves, but that’s usually outside of an app’s control.