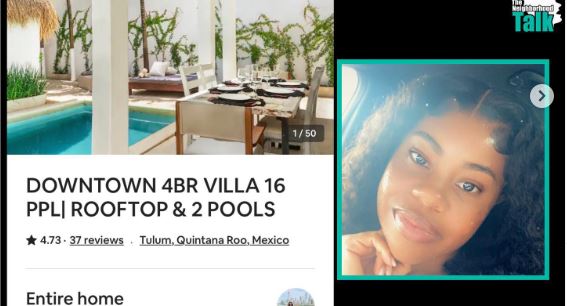 A St. Petersburg woman by the name of Amber Jackson had the scare of her life while checking into an Airbnb rental in Tulum, Mexico.

Upon checking into the vacation home, Jackson and her friends noticed that there appeared to be blood on the gate. The concierge team assured her that it was just painted, but Jackson didn’t believe them.

Once inside, Jackson noticed that the keypads were not set for the rooms. This would allow anyone to just walk into the home and have access to their belongings or the women themselves. After configuring the keypad herself, Jackson was ready to head out and have fun with her friends.

However, when they returned, they found a strange man standing outside the home claiming to be security. It’s important to note that by this time, they had been there for a few days and never saw security any other nights.

Jackson immediately contacted the homeowner and concierge team to verify the man’s claims but no one answered for the entire night. The women guarded themselves with knives as they slept and checked out early the next morning.

It wasn’t until Jackson contacted Airbnb directly that the homeowner contacted her only offering a $67 refund of the $3671.65 she paid. Jackson says her review was deleted and she fears she could have been a sex-trafficking victim if she hadn’t been so vigilant. The homeowner allegedly claimed to know the “security” guard but couldn’t give answers as to why he randomly appeared at the home.