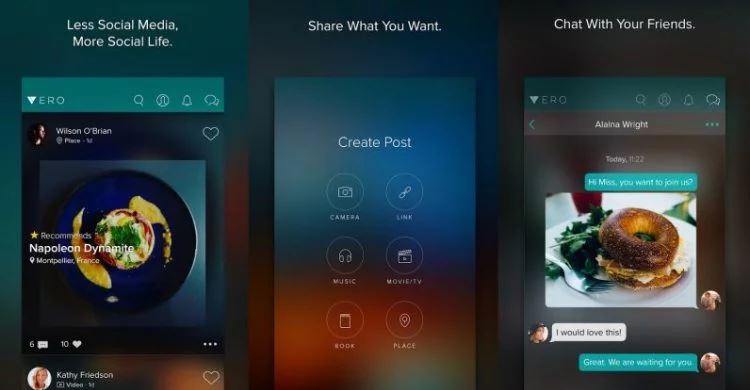 Vero is a social networking site that has the central selling point of being ad-free and not based on an algorithm.

Unlike Twitter or Insta where you can just post a message or a picture, with Vero you add movies, tv, music, books, places, photos, or links each time. Plus, it has the bonus feature of allowing you to easily choose exactly who sees each of your posts.

You can choose exactly who sees your content each time by splitting your followers into four groups: close friends, friends, acquaintances, and followers. None of your followers will know which group they are in and you can turn off individual post types from the people you follow eg. if your mate keeps posting too many bad TV recommendations, you can filter them out.

Vero previously said that its first million users will get free access to the app, then it would introduce a subscription fee. But after the app recently passed the million-user mark, Vero announced it would extend its “free for life” offer due to “service interruptions” until further notice. (Vero has had some technical trouble over the past several days, likely due to the sudden surge in interest.)

Vero has not yet said how much any future subscription plan might cost. But the company says that information will be available soon.

Vero’s subscription-based business model is meant to allow the app to remain ad-free, according to Vero. In its manifesto, Vero argues that its customers are users rather than advertisers. By contrast, most social media companies like Facebook and Instagram make money via advertising.

Currently, the App is free to download on iOS and Android. About the App being safe to use, honestly, it seems to be just as safe as any other social media app we’re all already using. There’s always the risk of impersonators and identity thieves, but that’s usually outside of an app’s control.