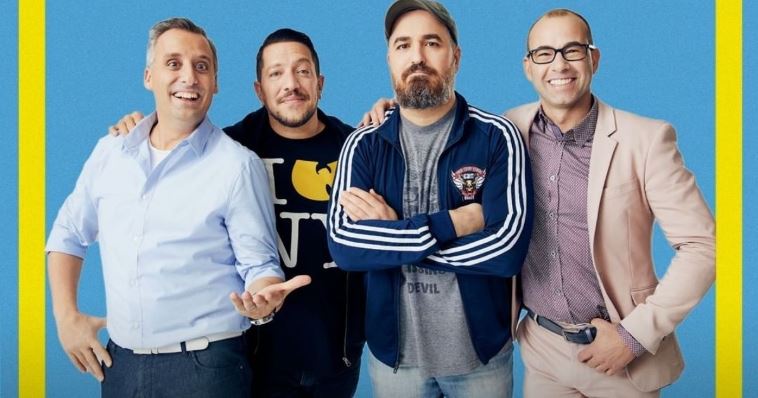 In 2020, Impractical Jokers: The Movie was released in theaters.

All members of Impractical Jokers were born in the same year, which makes sense when you learn that they met in high school and became buddies while they were students at Monsignor Farrell in Staten Island. (Check out their ages Here)

From there, they knew their shared sense of humor would take them far. They decided to form a sketch comedy and live improv troupe called The Tenderloins. Season 10 of their show will be a little different, though, since Joe Gatto will no longer be part of the cast.

It’s hard for television shows to stand out and build a large following because the people on the show have to be something special. There’s so much out there to choose from, but time and again, viewers tune in to watch Impractical Jokers from truTV. They have the right chemistry to keep fans interested, they’re relatable, and they’re always funny. Their hard work has paid off because they’ve built themselves quite the cozy net worth.

What is the net worth of the Impractical Jokers?

Impractical Jokers is comprised of four men who have been friends since childhood. First starting in a group called The Tenderloins, these guys use their chemistry with each other and their off-the-wall humor to make everything interesting for their fans.

Joe Gatto, James “Murr” Murray, Sal Vulcano, and Brian “Q” Quinn make up the group, and together they are comedic gold. They’ve been doing comedy together for a long time and have found great success with it.

One of the ways their popularity spiked was when the group competed on NBC’s reality show competition It’s Your Show. They took home the grand prize and a $100,000 winning.

According to WealthyGorilla, between the group’s television show, movie that spun off from it, and other appearances, they’ve compiled an incredible amount of money. The site reported that combined as a group, the Impractical Jokers’ net worth is somewhere in the range of $20 million dollars. Breaking that down, each would have approximately $5 million.

With these numbers really being the only public ones available, it’s safe to assume that none of the members of the Impractical Jokers has more net worth than the other, proving that each one of them is just as integral to the success of their show and their overall brand.

The ‘Impractical Jokers’ have other revenue streams than just their show.

We regular people who don’t have a massively successful show on television can’t always grasp how much money someone gets for an episode of a popular television show. According to several reports, the guys from Impractical Jokers make $50,000 per current episode, according to 2019 data. This rate is up from their paychecks in 2015, where each guy was making about $26,000.

In 2019, the guys had other opportunities to make money beyond their television show. They’ve done comedy tours all across the country, and they’ve also hosted cruises where literal boatloads of people have the time of their lives with sightseeing and having their favorite pranksters on board as well. They also appear on the reality competition series, The Misery Index.

There are some side projects the guys do apart from each other though. Murr also serves as Senior Vice President of Development at NorthSouth Productions, the company responsible for producing the Impractical Jokers show. James has also written several books, which are sci-fi thrillers.

Sal Vulcano has been on a few television shows as a guest star, including 12 Monkeys and Bones.