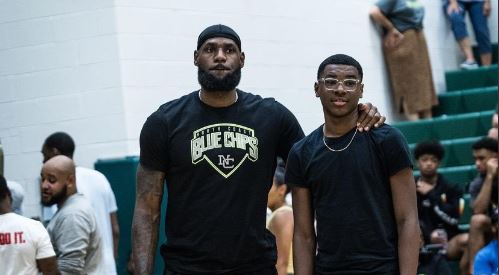 LeBron James is headed into his 20th season in the NBA and there is no doubt that fans are hyped to see what kind of basketball he gives us. James will turn 38 years old this season although there is an expectation that he will continue to be a top 5 player in the league. No one has had this kind of longevity before, and there is now a sense that he will someday get to play with his sons Bronny Jr. and Bryce Maximus.

Bryce is just 15 years old but he is already approaching LeBron‘s height. In a brand new photo that eventually went viral on Twitter, it appears as though Bryce is almost as tall as LeBron, who is 6’8″. As you can see, Bryce is missing just a couple of inches, which ultimately puts the High School baller at 6’4″ or thereabouts.

NBA Twitter was immediately intrigued by this photo as tons of fans commented on Bryce’s NBA prospects. Some believe that Bryce is a better player than Bronny and that if any of them are going to make the NBA, it is going to have to be Bryce. There is this belief that Bryce has all of the makings of an NBA star, although that is definitely a lot of pressure to put on someone who just played for their Junior Varsity squad last season.

Either way, Bryce has LeBron to fall back on for advice, which means the kid is most certainly being set up for success. Only time will tell whether or not he makes the NBA.